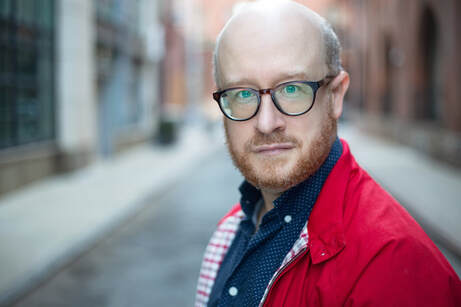 Robert K. Benson* (Messenger) is originally from the UK and trained at Drama Studio London. Theatre credits include Borderline, his solo show performed at The Edinburgh Fringe and NYC Fringe, Macbeth with Oxford Shakespeare Company, Brave at The Bristol Old Vic, the title role in Richard III with Theatre Raconteurs, Twelfth Night at The Alma Tavern, Richard II at the Pearl Theatre Company, In Your Image at 59E59, The Minervae with On The Square Productions, Within The Law at Metropolitan Playhouse and Empty House at The New York Fringe Festival. TV credits include: "The Blacklist," "The Blacklist: Redemption" and "New Amsterdam." Video games: Red Dead Redemption II. 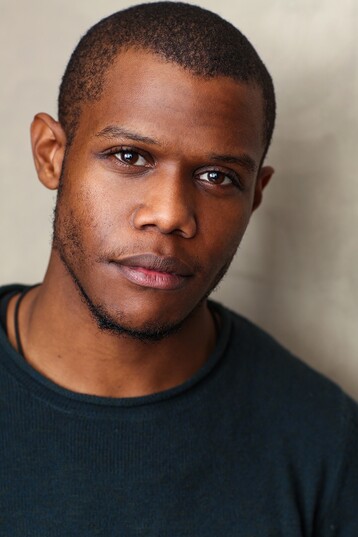 Jonathan Nathaniel Dingle-El (Orestes) As an artist, Jonathan Nathaniel is inspired to create theater that is accessible to inner-city communities of color. As a graduate of the Brooklyn College BFA Acting Program, he has had the pleasure of working with many artists from diverse communities of varying skill sets, who have gone on to found theater companies and various community outreach projects. He has worked with many local organizations such as Henry Street Settlement, Abrons Arts Center, The Living Mural, the New York Shakespeare Exchange, and The Motor Company NYC, a company whose work focuses on increasing site-responsive theater in local hubs within communities of color. Together, Jonathan Nathaniel and his colleagues work to decolonize theater by bringing it further from the traditional black box and two-thousand seat theaters and situating it within underserved communities in Manhattan, Queens, and Brooklyn. Jonathan and his peers utilize their combined resources and skills to present theater that mirrors our current reality, with all of its political and social diversities. In addition to these pursuits, Jonathan Nathaniel also enjoys success in film and new media, having performed with companies such as Lion Television, Amazon Prime, CBS Television, and Firebear Films. Jonathan would love to thank the Els, the Beys, the Blakes, the Thomases, the Schaefers, and the Vaughs for all their support. Ya'll raised a fighter. And finally, a huge thank you to friend and mentor Rose Bonczek, whose wisdom and encouragement have constantly spurred me to new growth. 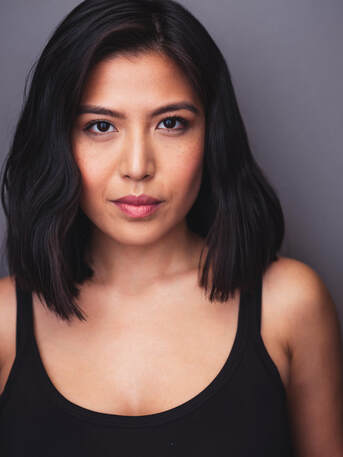 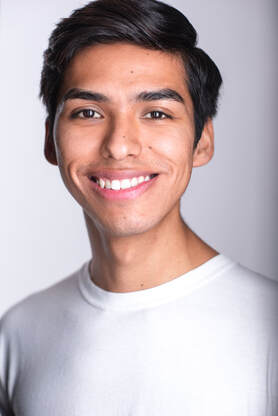 Josue Zeus Guerrero (Ensemble) is a Mexican actor/ music artist who received his B.F.A in acting from Brooklyn College. He’s recently played Oscar in Sweat (Don Buchwald Theatre) & Juan in Saguaros (JACK Theatre). When he’s not acting, Josue is writing, producing and recording music. He released his first music album in February 2020 titled Fragments of a Mind the EP. You can see more of Josue's work and resume on JosueZ.com. 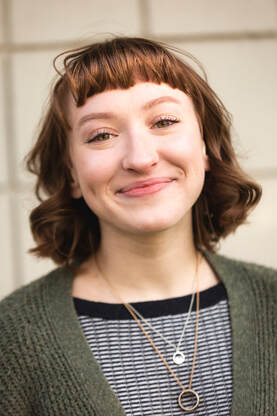 Lily Hilden (Ensemble) is a sophomore at Weber State University, pursuing their BA degree in Theatre Arts with an Acting/Directing emphasis. They were most recently seen as Cecily in The Importance of Being Earnest and Buster/Chorus 1 in The Impracticality of Modern Day Mastodons at Weber State. Lily is beyond grateful to have the opportunity to step away from their home state Utah in order to work with the Adjusted Realists in this production of The Refugees. 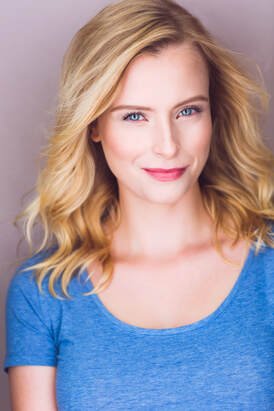 Suzanne Lenz* (Ensemble) is an actress and filmmaker based in Brooklyn, NY. Her first directorial effort, short film Christmas Eve Eve Or: The Things I Can’t Remember (which she also wrote and stars in) recently played at a number of festivals including the 2021 Mill Valley Film Festival. Currently, she's producing her first feature film Every Man For Himself, directed by Gary Gardner and starring Daniel Sharman and Nicholas Logan, which is now in post production. As an actress, she can be seen in the television shows Silicon Valley, Crashing, and Blindspot, and the feature films Obvious Child, The Desiring, and Ricki and the Flash. Recently, she starred in the hit web series, I AM YOU, for which she was honored for her work with a best actress award by the International Academy of Web Television. 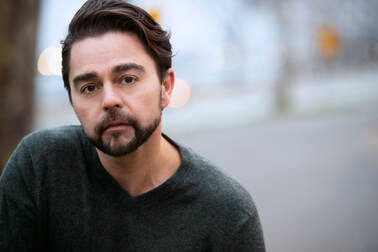 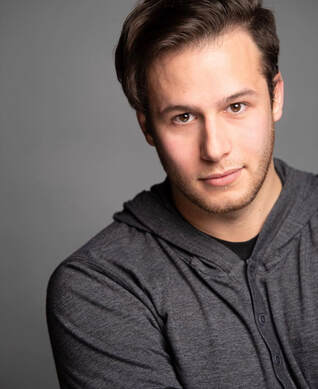 Matt Mastromatteo (Pylades/Co-Director) is an NYC-based actor, director, and educator. Matt holds their MFA in Theatre Arts: Acting from Long Island University: Post where they now teach acting among other courses. Matt’s interests lie in new play development which keeps them engaged in a number of writing communities in the area. Favorite credits include: As You Like It  [PostGrad Theatre Co.], Othello [PostGrad Theatre Co.], Memoriam [FringeNYC], and West Side Story [Way Off Broadway Dinner Theatre]. mattmastromatteo.com 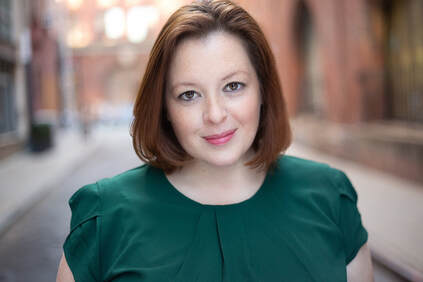 Rachel McPhee* (Clytemnestra) is an actor and producer and served as the Executive Director of award winning theatre company On the Square Productions from 2008-2013.  She received her BA at the University of Wisconsin and her Post Graduate Degree in Professional Acting from the Drama Studio London. Favorite acting credits include: Unbreakable Kimmy Schmidt, Momsters, Boardwalk Empire, Vieux Carre at the Pearl Theater and The Footage at the Flea. Most recently she produced and appeared in Dead Shot Mary, a solo show based on the phenomenal true story of Mary Shanley, one of the first women to be made first grade detective in the NYPD  during the 1930s. www.rachelmcphee.com 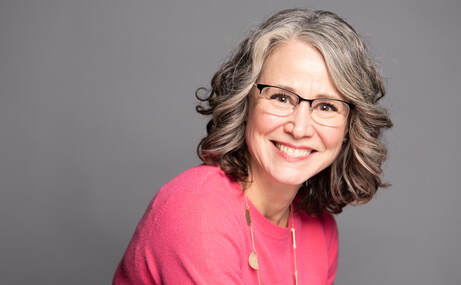 Valerie Clayman Pye* (Nurse)  is an actor, director, author, and academic who specializes in Shakespeare, heightened text, and new works. She is an Associate Professor of Theatre and Chair of the Department of Theatre, Dance, and Arts Management at LIU Post, where she teaches acting, voice and speech, and Shakespeare in Performance and Assistant Faculty with Theatrical Intimacy Education. Her book, Unearthing Shakespeare: Embodied Performance and the Globe (Routledge 2017) is the first book to consider how the unique properties of Shakespeare’s theatre can contribute to actor training as well as to the performances of Shakespeare’s plays. When she isn’t focusing on Shakespeare and devising new work of her own, Valerie has worked extensively on new play development, alongside writers such as Reginald Rose (Twelve Angry Men). A 2018-20 LabWorks Artist at the New Victory Theatre in NYC, Valerie has been developing "Shakespeare’s Stars", an immersive, multi-media, multi-sensory performance for babies and their caregivers, along with Spellbound Theatre, featured in The Wall Street Journal. www.valerieclaymanpye.com.

Stephen Kaliski (Director and Playwright) is a director, playwright, and educator. He was recently the Resident Director of Broadway's Charlie and the Chocolate Factory, directed by Jack O'Brien. Other directing credits include Gluten! ​(59E59), Dead Shot Mary, Pterodactyls (Teatro Circulo), A Midsummer Night’s Dream and In the Next Room or the vibrator play (Yale Dramatic Association). Playwriting credits include West Lethargy, which was published in Plays and Playwrights 2011 (ed. Martin Denton), His Minute Hand, Any May Now, The Briefly Dead, and The Refugees. He has worked with such directors as Austin Pendleton (Three Sisters, Assistant Director) and Michael Grandage (Evita on Broadway, SDC Traube Fellow) as well as with The Royal Shakespeare Company, Classic Stage Company, and LAByrinth Theater Company. Stephen received his BA in English from Davidson College and his MFA in directing from Brooklyn College. He’s taught acting, directing, public speaking, and master classes on leadership and joy at Fordham, Brooklyn College, NYU, LIU Post, Yale, The Professional Performing Arts School, Talent Unlimited High School, and BMCC. He is currently a Visiting Assistant Professor of Theatre and Writing Studies at Davidson College. www.stephenkaliski.com.

Jennifer A. Kokai (Dramaturg)  is a dramaturg and playwright who currently lives in Ogden, Utah where she teaches at  Weber State University. Previous dramaturgy projects include More Things on Heaven and Earth with Claddaugh Theatre Company, Sunday in the Park with George at Weber State, King Lear at Butler University, in addition to work with the Utah Playwrights Collective. As a playwright, her plays have been performed by Birmingham Children’s Theatre, Culver City Public Theatre, Plan-B, Montana Rep, Pygmalion, Riverside: The National Theatre of Parramatta, THML Theatre, Theatre Synesthesia, Wasatch Theatre Company, Building Better People Productions, Off-Key Anthem Collective, and a variety of educational institutions. She was included in the Lark Play Development Center's 2014 Playwrights Week. Her newest play, Ballet for Aliens, about being a child with a chronic illness will tour Utah with Plan-B in the fall of 2022 and her musical Matchstick Girl written with Ken Plain will premiere at WSU in February. She is a member of the Plan-B Theatre Company Playwriting Lab and the Dramatist’s Guild.

DJ Pike (Technical Director)  is from Clinton, Utah and earned his BA in theatre at Weber State University in Ogden, UT. DJ is a second year graduate candidate at The University of Tennessee in Knoxville, where he is earning his MFA in scenic and projection design. Recent scenic designs include Stinney: An American Execution, The Winter’s Tale, The Revolutionists, Everyman, Sunday in the Park with George and Hedda Gabler.  Recent projection designs include The Magic Flute for UT Opera, Sunday in the Park with George, The Cripple of Inishmaan, Sense and Sensibility, and Weber State's Presidential Inauguration. More of his work can be found at djpike.com.

Kahei Shum (Ketti) (Costume Designer)  is delighted to be part of the Refugees team again! Originally from Hong Kong, Kahei received her BA in Theatre from UW-Madison, her BFA in Production Design and MFA in Costume Design from UNC-School of the Arts, and was the first Visiting Artist in Residence at Wake County. Kahei designs costumes frequently at Children's Theatre of Charlotte, Peppercorn Children's Theatre, Raleigh Little Theatre and Theatre in the Park. Her work has also been seen at Barter Theatre, Triad Stage, Burning Coal Theatre and many more. She was previously a faculty member at CPCC and Wake Forest University. Kaheishumdesigns.com

Anita J. Tripathi (Scenic Designer) is the Assistant Professor of Design and Technology in the Theatre Department at Davidson College.  She has worked professionally as a scene designer for over 15 years at such venues as The Children’s Theatre of Charlotte, Playmakers Repertory Conservatory, The Shakespeare Theatre of New Jersey, and The Virginia Stage Company (Resident Scene Designer). She has also assisted Tony Award winning designer David Gallo on a number of productions. Her work has been  featured as a finalist at the World Stage Design Exhibition in Cardiff, Wales and she received a United States Institute for Theatre Technology Fellowship to support her research in India. She holds an M.F.A. in Scene Design from the University of South Carolina and is a member of the United Scenic Artists Local 829.  Her design work can be viewed at www.anitajtripathi.com.

Weber State University (Co-Producer) Stewart Education Foundation, Browning Center for Design, and the Telitha E. Lindquist College of Arts & Humanities. The College teaches students to excel as they seek, understand, question and express complexities critical to the experience of being human.  Undergraduate degree programs are offered in the following five areas: Communication, English, Foreign Language, Performing Arts and Visual Art & Design. Master’s degrees also are offered in Communication and English. The college serves more than 2,000 undergraduate majors and 250 graduate students. The Lindquist College of Arts & Humanities is the Western region’s foremost institution for student-centered teaching and research that investigates the human experience and aims to educate global citizens who are responsible, creative and critical artists, performers and communicators. For more information, please visit, www.weber.edu/cah.